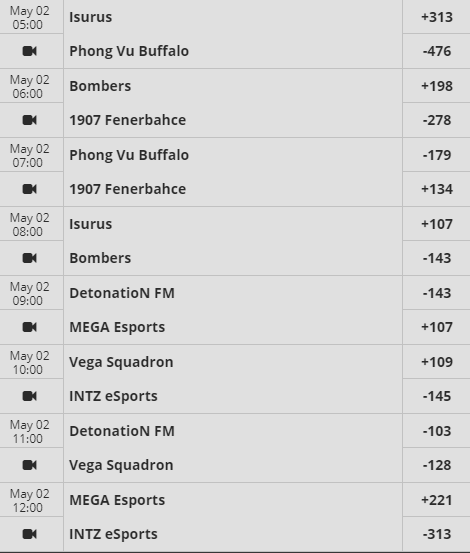 Yesterday I learned an incredibly important lesson from that small sample size; these teams aren't just worse than I'd predicted, they're SIGNIFICANTLY WORSE... ALL OF THEM. The amount of fundamental mistakes not just in gameplay but individual mechanics was honestly flabberghasting. I was honestly disappointed. It makes me sad to say it but it appears the Wild Card regions have all taken a downturn. Now I could be proven wrong and it was just first day jitters but the level of play was honestly abysmal across the board so unless we see egregiously inaccurate lines we're going to just steer clear of Group A for the rest of play-ins. There's an argument to be made for just betting every underdog in these kinds of situations, especially when the good teams looked just as awful, but I'm just not going to mess with it.

It's not that I haven't watched at least some of these teams. I watched all of Phong Vu Buffalo's playoffs and some regular season, and almost all of Fenerbahce's games this season and I don't remember it being this bad. With macro and strategic weakness it can sometimes be difficult to identify in the context of a region's overall weakness. An example of this would be Korea last year. I thought a few of the top Korean teams looked exceptional and poised to have another excellent performance at Worlds but what I missed out on was the big picture of an inbred meta creating a weaker practice environment and a horrendous read on the metagame. However that isn't the case with micro and mechanics. There were some absolutely unforgivable mechanics for professional play. These games quite honestly look a lot like my decreped Platinum/Diamond solo queue games and that's awful.

I could be wrong and this was just first day jitters but I'm relatively confident that isn't the case. It's not often you can derive so much from a small sample size like this but these teams straight up suck and there isn't a chance in hell they challenge Team Liquid and probably not Flash Wolves either. It's a shame because I was hoping we'd get some surprises like we've been getting all season to make this interesting but it's not. Consider this a lesson learned not to heavily bet regions I'm not completely dialed into because I could have seen this even with the games I did watch and didn't. My apologies.

It's not to say it wasn't entertaining but I just lost a lot of respect for these teams. All of that said I do have a selection for Group A and a few for Group B tomorrow but they'll be much lighter. I also hope we see a better performance from Group B than we did from Group A.

This is simply a value bet. With all of these teams, including Phong Vu and Fenerbahce performing so poorly AND the best of one factor this is honestly a situation where anybody can take games as we saw today. I'm not going to bet every single underdog but the severe ones I'll certainly take.

Mega have really high kill totals but low death total but they also flawless'd their weak and short tournament so their averages aren't a good measure. Their numbers are hard to derive much from but they're an aggressive team while DFM are more methodical. I know today we had some really high kill totals but I like a few of the unders in Group B since these teams aren't nearly as recklessly aggressive. These look like sucker bets after an average of 32+ kills per game yesterday but I think it will be more back to earth today.

These two teams are very close. I think INTZ are the team to get out of this group. They looked quite strong in their playoff run but the question will be whether that was a flash in the pan or not. I think Vega is the next most likely to escape this group and that Mega and DFM are much less likely. I expected a lot more out of Group A than Group B other than INTZ And Vega so I'm extremely skeptical for the rest of this Play-In Stage and this will be my only selection tomorrow. Consider my flag planted for INTZ. This was my pick of the week on The Gold Card Podcast this week but I'm downgrading my confidence and wager to one unit after seeing day one. If my book opens it back up the under on kills in this game is at 28.5 and I'd take that since both of these teams tend to go a few kills under that number on average.

I think INTZ and Vega are a cut above both DFM and Mega but I do happen to like the way DFM play the game. They're smart and not reckless. This might be a bet I hedge after watching the first few games of Group B if it's as weak as the others but for now I'm confident in Vega. Taking the under despite the high kill counts in this tournament so far because both of these teams prefer to play a little on the slower side averaging 25 kills per game in LCL  (as a region) and 22 kills per game in LJL playoffs. Both of these teams are in line with those numbers as their combined K+D is similar.

While Mega are going to look to be aggressive from what I can tell, INTZ are a lot like old SKT teams and tend to bend and not break. They played a lot of long, low to medium kill per minute games in playoffs and towards the end of the regular season. Regardless both of these teams average combined K+D lower than this total and again I'm going to ride with the regression to the mean a bit here and think the kill totals come down from today.

An added note to these kill totals bets. Interestingly the books have look aheads for Sunday that have kill totals of 22.5-24.5, SIGNIFICANTLY LOWER than these. Not that the book is always right or anything just some food for thought.

I'm going to add unders on the Group A games as well. The more I look at these games and the more I think about how tournaments tend to go the first day is always wild and it settles down plus these kill totals simply aren't sustainable. I know these teams are bad but I'd expect everyone to reel it in just a tad for tomorrow. This is mostly value based. Kill total lines are almost never this high and I'm expecting some regression to the mean.