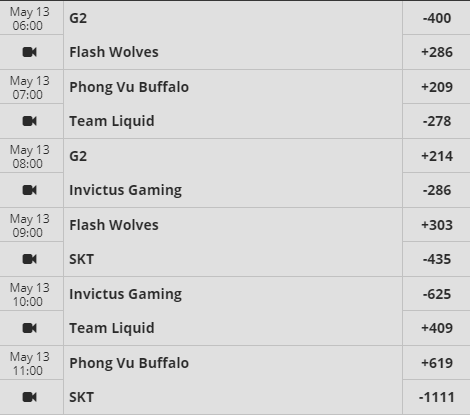 In the first match where these two met it was a very slow paced game with only five kills by the mid game and G2 enacting their 1-3-1 with Caps and Wunder. I don't think itll be quite that quite this time around because I don't think Flash Wolves are going to give up the Sylas or the Ezreal but G2 will also have first pick and the option to take Ryze. It's pretty hard to take G2 off their game plan and who knows when they'll break out something like a funnel. I expect G2 to take this one down in a lower kill game.

Team Liquid and SKT with their slower, more deliberate style have been the only two teams to be able to bore Phong Vu to death in this tournament. They were the only games that satisfied the under besides this mornings Invictus matchup which was barely under an obscenely high 31.5. Something about that style of play and TL and SKT not playing Phong Vu's game just stops this team in their tracks. It turns out when you don't stoop to Phong Vu's style they look bad... who know? I love the under here but because it's only at 25.5 I'm going to keep this to a one unit wager. I was hoping we'd get 27 or 28.

Just when you thought you couldn't get higher kill totals we see 32.5 in this matchup. Don't get me wrong, I get it, there were 44 kills in their first meeting but I think both of these squads were feeling each other out and think this match will likely be a lot more tame. 32.5 is a ridiculously high number and I'm going to be hard pressed not to bet this.  I think with two teams that potentially want to split and G2 preferring that style I'd expect a lower kill game than the fiesta we got in game one between these two.

I was hoping we'd get some overreaction to Flash Wolves win but I think this line is about where it should be. Game time of 29 and kill total of 23.5 I kinda like the over on both but it honestly wouldn't surprise me to see SKT stomp this one and show a willingness to play more aggressive and uptempo.

Liquid put up a surprisingly good fight against Invictus on Day 2. I was honestly impressed but again I think these top four teams are all excellent so maybe I shouldn't be. Invictus stomped SKT and while I don't want to overreact to that single game I just want to point out that Liquid and SKT are the two most stylistically similar teams in this tournament. Invictus prey on teams like this which is another reason I was so surprised by the great performance on Day 2. I don't know if Liquid put up another one like that and I'm going to take the double under here in what I'm predicting will be and Invictus stomp.

I discussed it with Liquid vs Phong Vu but the Buffalo really seem to struggle with the more conservative teams that don't play into their style and I like the under in situations like this. There were 19 kills in 28:12 in the first meeting between these two and I'd expect something similar but I'm a bit more skeptical this time around because SKT might take this opportunity to exercise their early game muscles in preparation for teams like IG and G2. The numbers are also rather low so I'm going to cut the wager in half.