Before I dive into the selection I'm going to give the same warning I did for playoffs in most regions. I'm more or less doubling my exposure in these games partially because I feel strongly about them and partially because I like to put a little more on the line for my own entertainment! I'd suggest cutting these wagers in half to get a sense of how confident I am relatively speaking. Mixed light and moderate wagers with some heavy handed parlays here. If you're tailing I'd suggest cutting back but as always I offer full transparency with what I'm doing.

During the summer I'll likely increase my unit size 25-50% but for now the numbers will look a little goofy and heavy handed. Unlike last year I'm not running by a percentage of roll per wager and just opted for a flat unit size to simplify things and keep it easier from a bookkeeping standpoint on my end.  Just bear with me as we'll be upping and it will look much simpler/less heavy handed again once I reset for summer! So I'm going to sound a little crazy to a lot of people here when I say I'm fairly confident that Liquid are going to take a game in this series. They got utterly smashed in lanes and had a disastrous lack of priority in the first group stage game against IG and still managed to bring it back on them even with a huge deficit. Not that one game means a lot or anything but I think it shows a few things. First, that Team Liquid made a few easily correctable mistakes that they should be able to game plan for now with a few games against IG. Second, that Invictus tend to either screw around or have massive lapses in judgement during games and can throw a game, particularly in the early and mid game. Team Liquid have also shown a willingness to adapt and try new things but have also shown the ability to play "their style" on this level with success.

From a betting perspective there is only really a few ways to play this series. If you're absolutely confident that IG will sweep this series the best odds that I found are -204 on BetOnline for the exact 3-0. That's a bettable number but going that heavy on an exact 3-0 is a big risk as it is and even more so against a team that I'd say is a legit international contender in Team Liquid. Are TL going to win Worlds? Probably not but +179 for the over 3.5 maps (or similarly the +2.5 maps at +175) implies just short of a 36% chance of that happening. I think Team Liquid have a greater than 50% chance even if you're skeptical of them or think they're severely outclassed. I for one think this is actually closer to 80%. I think Team Liquid will either surprise IG with something in game one or that IG will stomp the first game or two and then Team Liquid will find a victory in the disrespect/"styling on you" game from Invictus. I even think Liquid have a better chance at winning this outright than the odds give so we'll put a fun quarter unit on that wager as well if for nothing else than to say "told ya so!" I think this will be a suprisingly competitive series. Team Liquid are better than people are giving them credit for and while Invictus look like a total menace they are certainly not immortal.

Note: I'm taking the map bets because it's a net profit if TL take just one. Think of it like a split up +1373 and if it ends up being more than that we're up big and as I've stated I'm confident they'll win one of these. 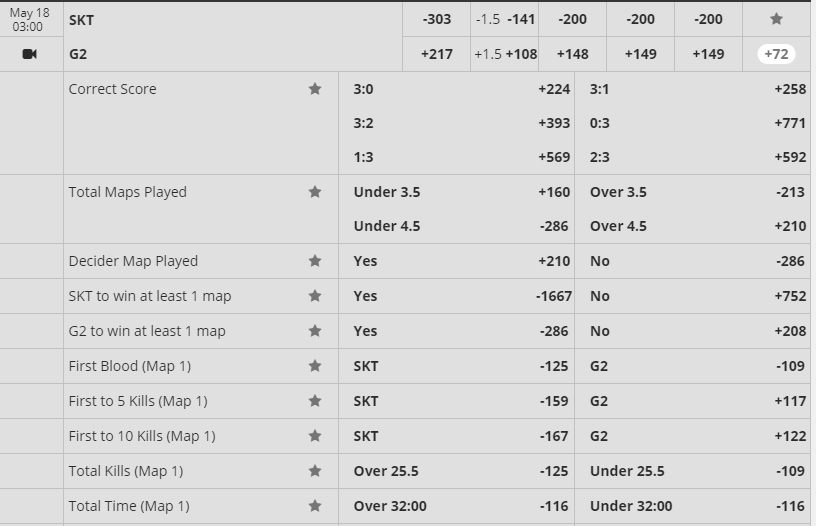 Another series and another juxtaposition of fire and ice. Calculation and discipline vs creativity and wildness. I think this is going to be a five game series and you could make arguments either way. G2 are exactly the kind of team SK Telecom struggles with but SK Telecom are also so good historically in best of fives. They seemingly ALWAYS figure you out! I think the catch here is that unlike a lot of teams that are similar to G2's bizarre and diverse drafts and creative in game decisions and playmaking, G2 can actually play you straight up as well. If we were to theoretically get these teams into a more controlled, SKT-style for lack of better words, game then I think G2 can actually win there too. In that scenario I'd have SKT as the favorites but G2 can hang unlike a lot of "cheese" teams. G2 aren't a cheese team, they're just really damn good.

I think the combination SKT's ability to adjust in best of five play and the overall quality of players, particularly Clid who is playing out of his mind right now, give SKT the edge but not by much and certianly not by -303 odds (implied: 75%+). This series is closer to 50/50 for me. I think SKT should be 55-45 AT MOST in this series and if I had to just pick the straight up winner here I'd say it's SKT but the odds we're getting with G2 are outstanding and unlike a lot of teams in the position they are on the betting board they actually have a really good chance to win not just some games but the series outright. I absolutely love betting G2 here and we're getting plus odds on the +1.5 maps as well in what I assume will be an excellent and competitive series between to very different but similarly skilled teams.

I don't want to spend too much time on it but a lot of you know that I tend to follow my "gut" more than a lot of cappers. I think there is at least a small element of art to this and for better or worse I tend to follow that. The point I'm getting to is doesn't this just feel like the right spot for G2? Because I certainly do and when these odds popped up I felt they were pretty severely disrespected.